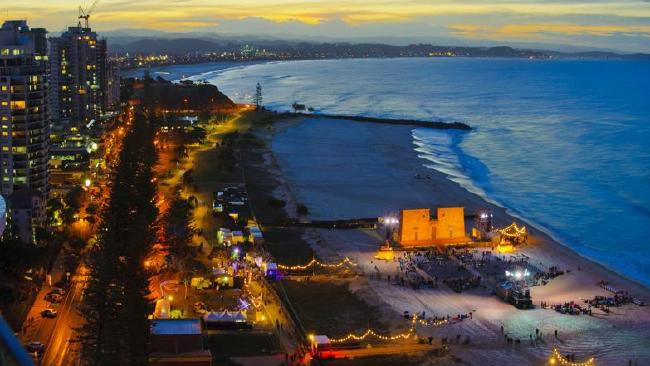 The proposed Gold Coast Hangout festival offshoot would bump into the same stretch of Coolangatta Beach to be used for this week’s Opera Australia season of Opera on the Beach — Aida.

TEG Dainty, US partner AEG and local partner Cross Promotions want to bring mega US music festival ‘Hangout’ to the Gold Coast next year for an exclusive
two-day event in the sand on Coolangatta Beach in December.

‘Hangout’ would be exclusive to the Coast, making it a major drawcard with music tourists from Australia and overseas -  the same way Splendour is a one off in Byron Bay.

Anticipated to be known as ‘SandTunes’, the one-off Australian event would feature two stages and cater for up to 35,000 people.

Backed by Gold Coast Tourism and the Live Music Taskforce, the Hangout festival would help fill the $60 million hole left on the Coast’s summer events calendar in the wake of the demise of the Big Day Out and Summafieldayze.

Hangout is a beach, music and arts festival on Alabama’s Gulf Shores that has hosted acts such as Kings of Leon, Red Hot Chili Peppers, Foo Fighters and Mumford & Sons.

The promoters want a five-year deal with a five-year option and will guarantee the event is the only Hangout brand festival in Australia for the term of the agreement.

Councillors voted 7-1 in favour of the proposal which will now go to vote at a full council meeting this month.

Mr Dainty said after the meeting “Once the Commonwealth Games are over, it will build on the city’s strong profile for staging international events.”

“This is big. We’d be bringing 40 or 50 bands into the country plus locals, plus 500 or 600 staff. An event like this touches everyone in the business community. Economically it’s brilliant.”

Music insiders say Byron Bay, Freemantle in Perth, and St Kilda, in Melbourne, are all eager to secure the event if the Coast doesn’t want it.

However, Mr Dainty said “We’ve had people knocking on our door but this is our preferred site.”

Tell us what you think of this proposal? [email protected]